This healthy eggplant parmesan features a deliciously seasoned eggplant that is baked instead of fried. A smothering of sauce and cheese keeps the classic flavor that you know and love while keeping the calorie count low. You will make this baked eggplant parmesan again and again!

Eggplant parmesan is one of my favorite Italian recipes. LOVE IT! The typical version is dredged in flour and fried crisp, which didn’t exactly align with my health goals. Sadly, I had to stop ordering it when I went out to eat.

I truly thought I was saying goodbye to this dish until I had a particularly strong craving and decided I’d try my hand at making healthy eggplant parmesan.

I’m so happy to report that the experiment was a success! I made the BEST healthy eggplant parmesan ever!

Prior to losing weight, I made eggplant parmesan the traditional way – by frying it. Yes, it tastes fantastic, but it’s beyond fattening. This is because eggplant is like a sponge—it soaks up all the oil so you have to add more and more.

Plus, it takes forever to make fried eggplant parmesan. Frying is messy and makes your house smell pretty gross. And, of course, the clean up after frying with a vat of oil is ridiculous!

For all these reasons, I decided to make baked eggplant parmesan instead. Spoiler alert – it totally worked, was just as good, and the clean up was way easier!

How to Make This Healthy Eggplant Recipe

Let me just say right now, before I even start talking about the recipe, that if you’re looking for a healthy baked eggplant parmesan recipe this is it! It’s delicious and you’ll never miss the frying part!

Okay, let’s start with the eggplant. I peel my eggplant. You can keep the skin on, and many people do, but I prefer to remove the eggplant skin. This is easier to do with a sharp knife rather than a peeler.

Next, I sliced the eggplant into 1/2 inch or so slices and laid them on a few sheets of paper towels. I sprinkled both sides with salt (about 1/4 teaspoon on each side) and then place more paper towels on top.

This is really important to do because eggplants are very porous. You want to get as much of the moisture out as possible so that your baked eggplant parmesan doesn’t become mushy and inedible. 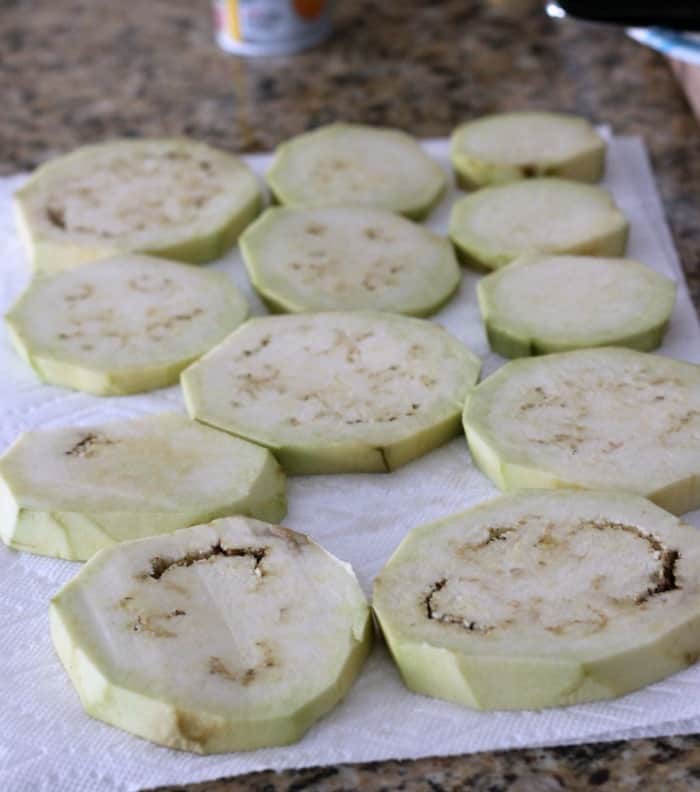 Next I put cookbooks on top of the eggplant and left them there for 45 minutes. You can use bowls, dishes, or any heavy item. This is to squeeze out the bitter juices from the eggplant and tenderize.

I know this is high maintenance but I don’t recommend skipping this step because in my experience it does make a big difference. Some people place the eggplant in a colander with paper towels – I prefer my paper towel cookbook method. 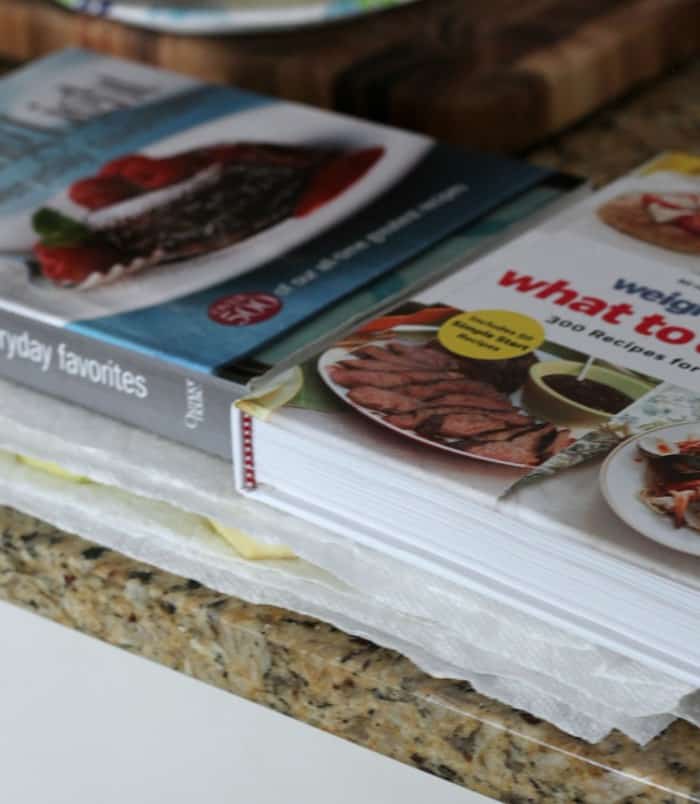 After 45 minutes, I rinsed the eggplant under water to remove the access salt. Then I mixed together 1 egg and 1 egg white in a bowl and then put together a breadcrumb mixture in another bowl.

Which Breadcrumb Mixture Should I Use For Baked Eggplant Parmesan? 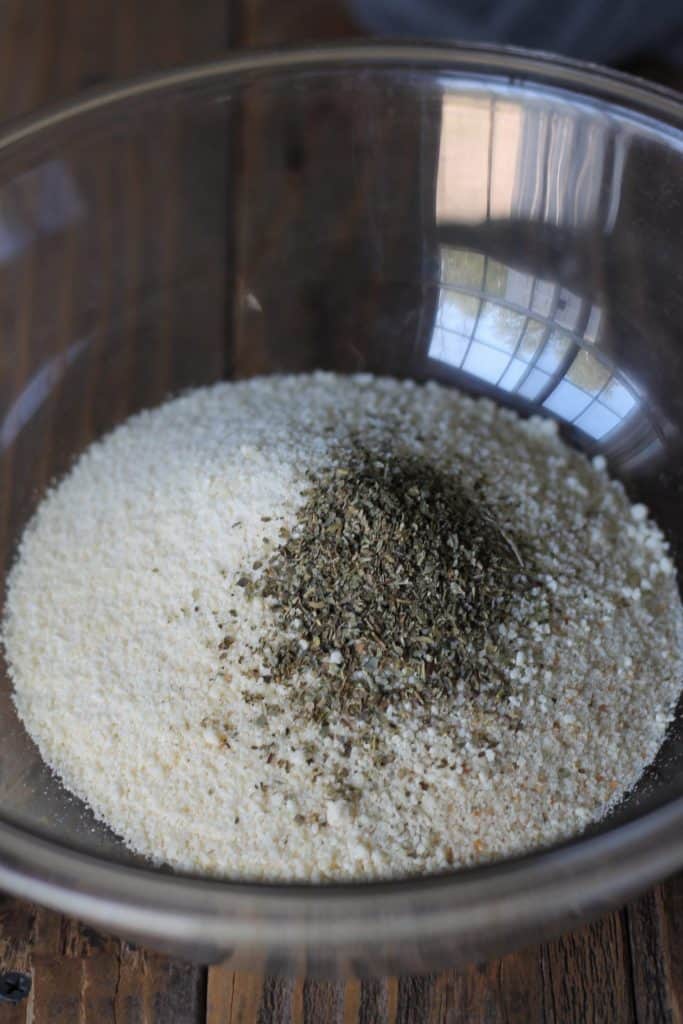 I dipped each slice first into the egg then the breadcrumbs. I should note for this recipe I used 1 medium eggplant. If you use a huge eggplant, or more than one, then just use more egg and breadcrumb mixture if needed.

Here’s my little secret to getting perfect baked eggplant slices. I brushed the sheet pan with 2 tablespoons of olive oil. This gives the eggplant a nice brown “almost fried” look and taste with drowning in oil. 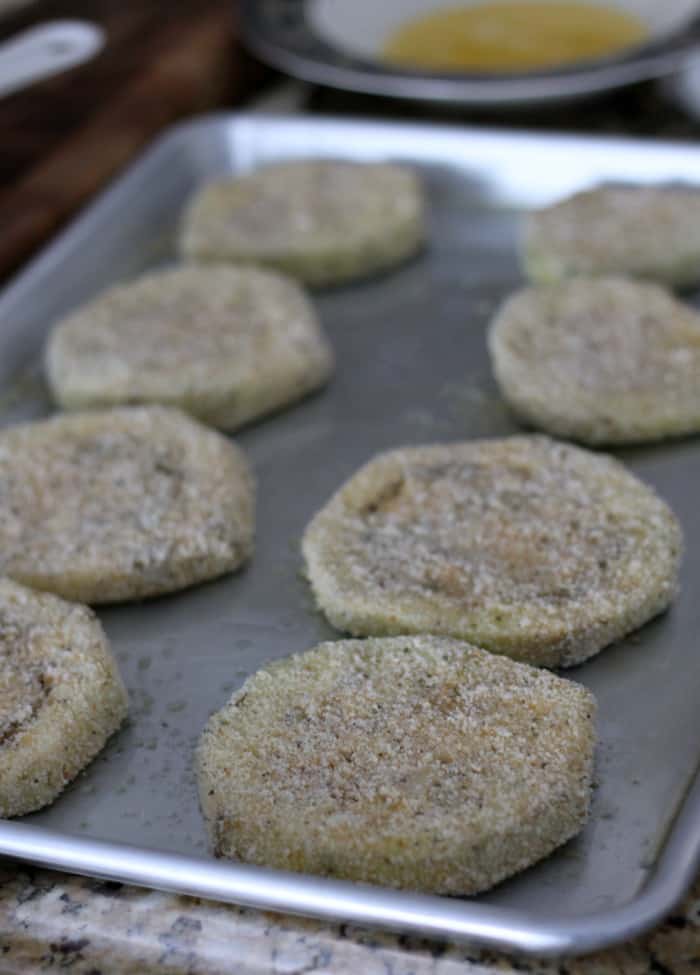 How to Make the Baked Eggplant Parmesan Ahead of Time

At this point, you can put the rest of the recipe together or freeze the eggplant to use at a later date.

So yes this eggplant has a little bit more work upfront, but I love that it can be prepared ahead of time. If you have a bunch of eggplant in the garden this is a great way to preserve it for the winter months. 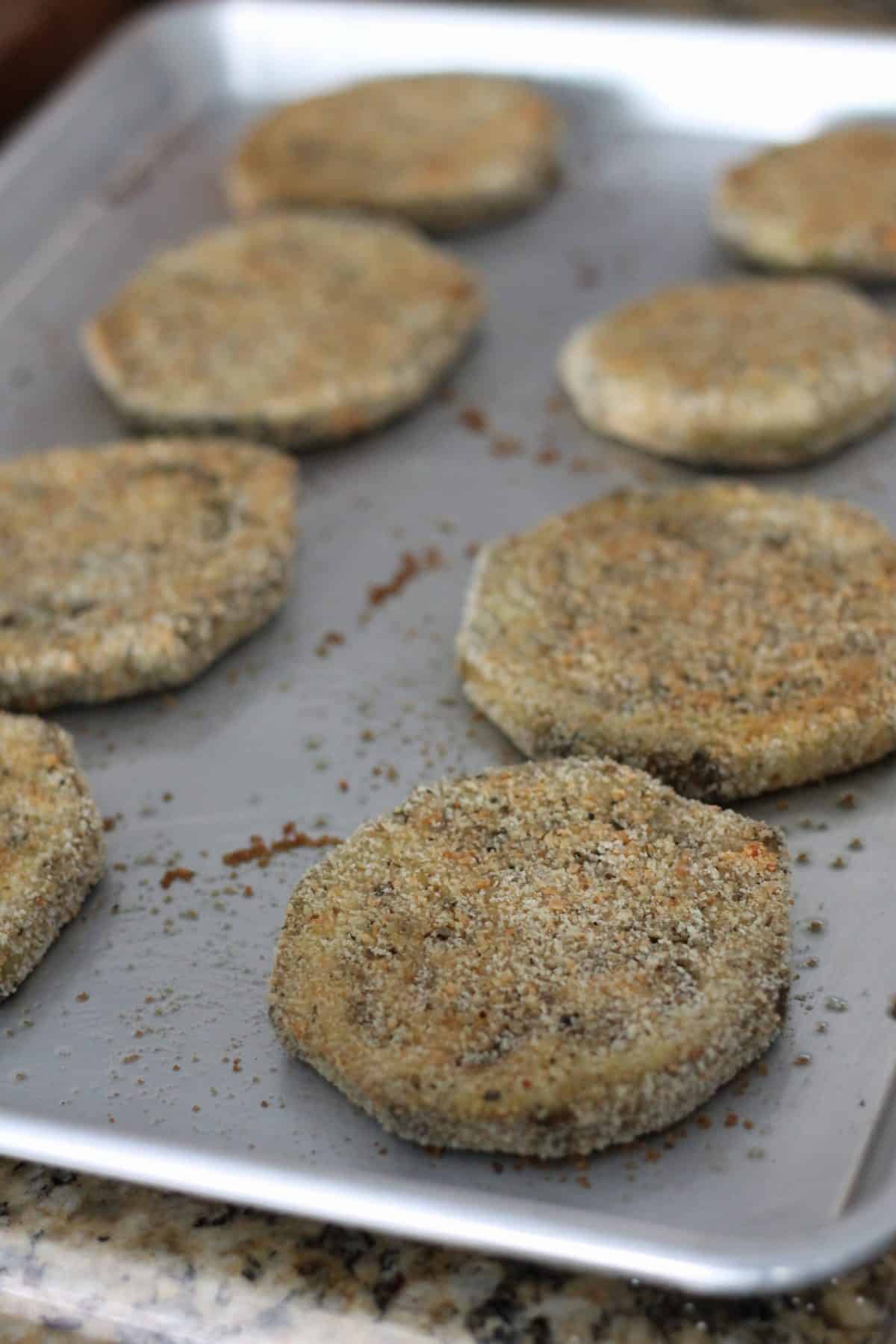 The Best Sauce to Use for Eggplant Parmesan 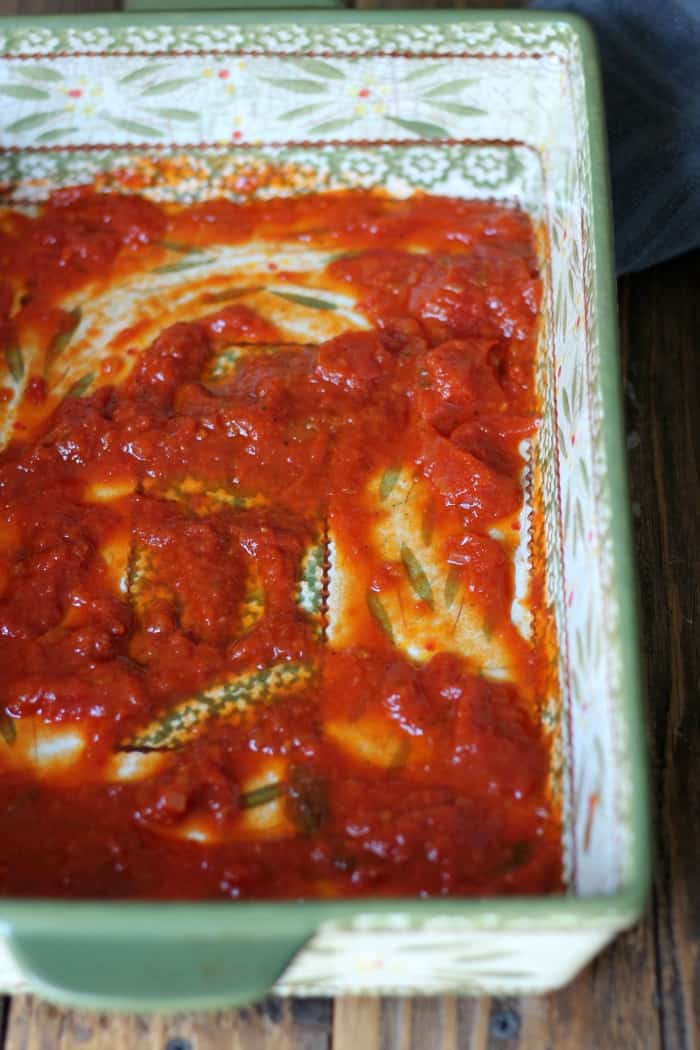 Of course, you can use homemade sauce but I kept this recipe simple with jarred sauce. My absolute favorite jarred spaghetti sauce is Rao’s Homemade Marinara Sauce.

It’s on the pricier side but I can get a great price ($8.49 for a 32-ounce jar) online at Thrive Market. That’s the best price I’ve found on this sauce.

In my experience, spending a little extra on the jarred sauce is totally worth it and can make or break a recipe. What I’m trying to say is…don’t use the cheap stuff! 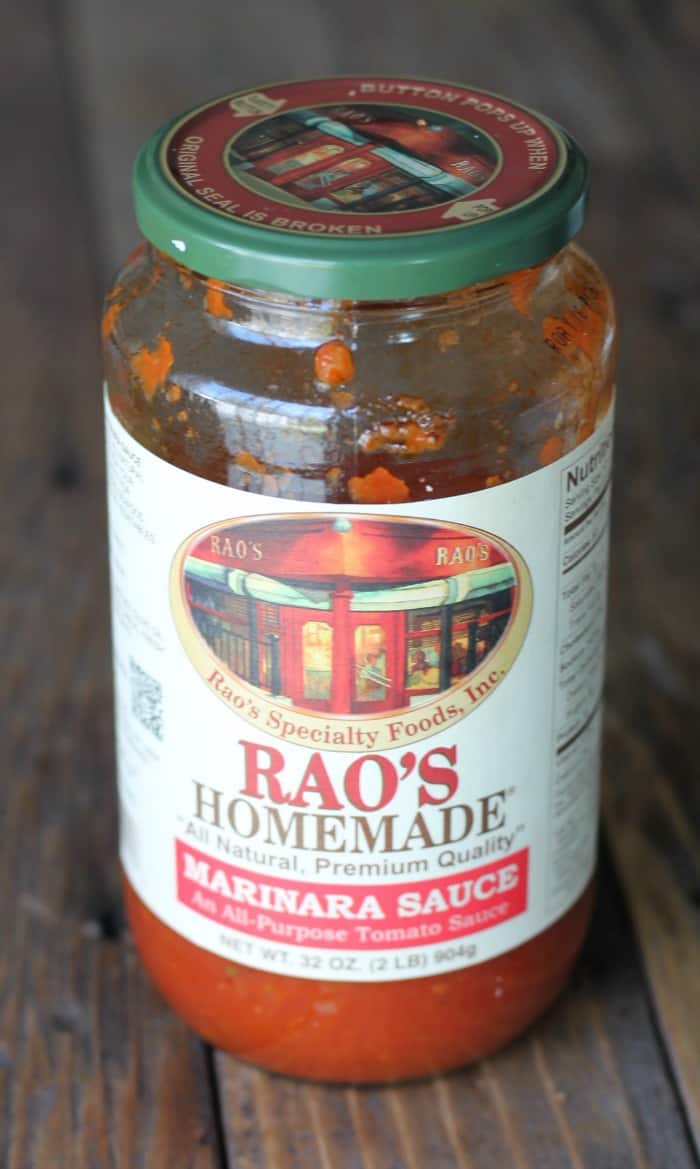 Next, I placed the eggplant slices in the sauce and covered with another 1 1/2 cups of sauce. Of course, you can use more or less sauce.

Now it’s time for the cheese. I used fresh mozzarella in this recipe but you can certainly use regular shredded mozzarella too. Fresh melts nicely, but it really doesn’t matter. I used about 2 ounces of cheese per 2 slices of eggplant. 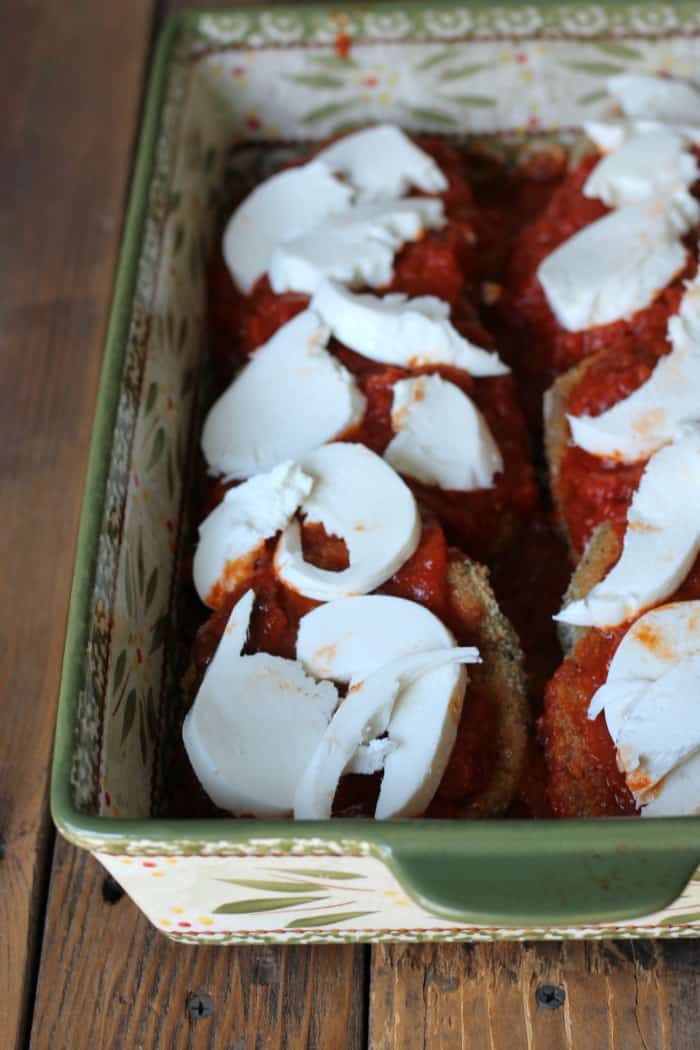 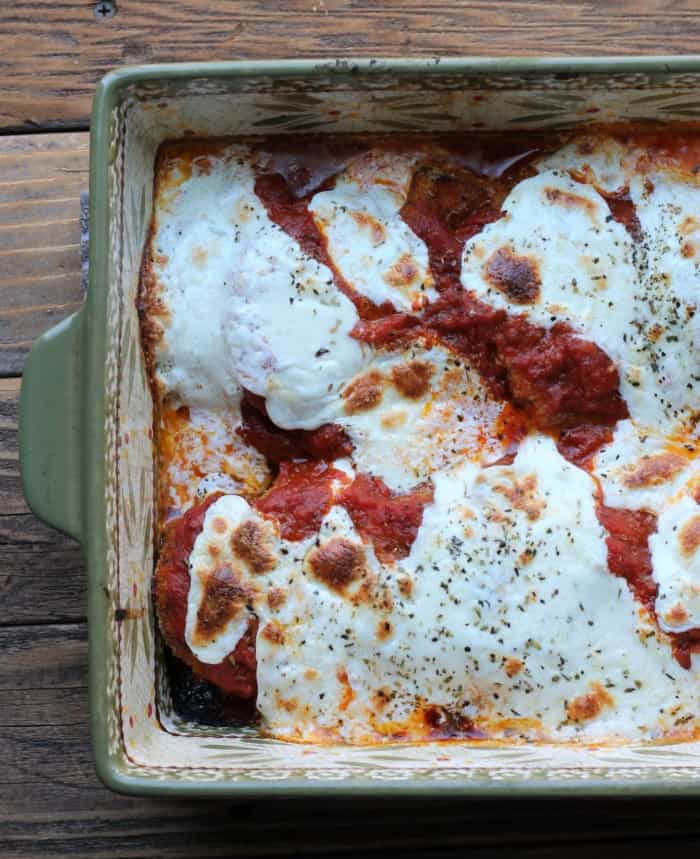 This baked eggplant parmesan is beyond delicious and much healthier than if it were fried. Trust me, you wouldn’t even know it’s baked. 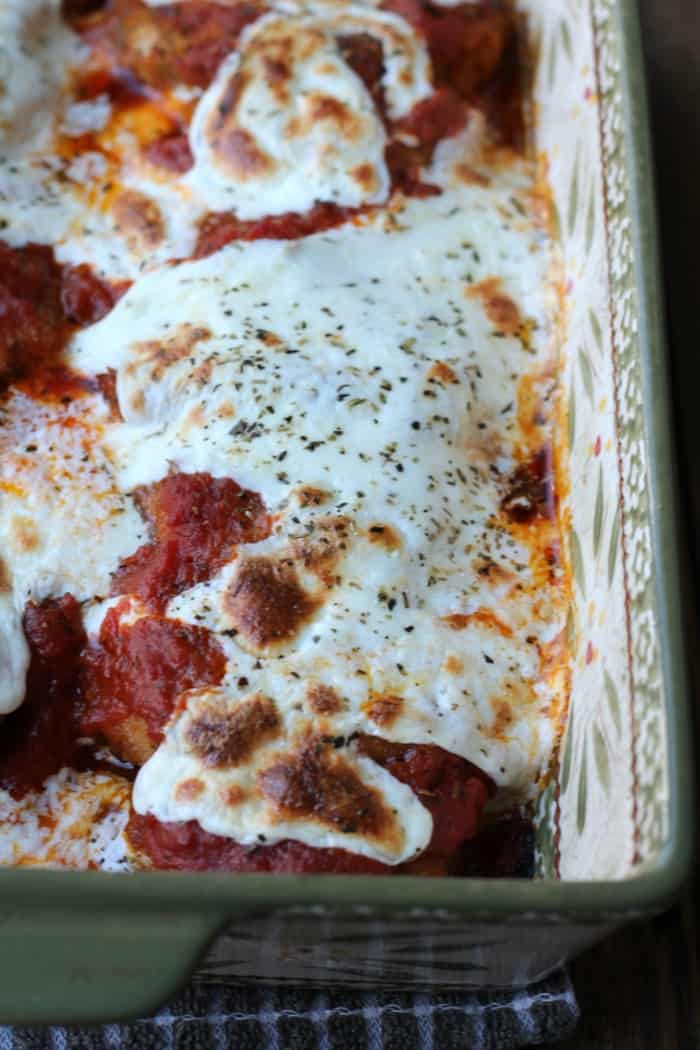 I took one bite and immediately thought it could rival any Italian restaurant fried recipe. I mean it, this eggplant parmesan was that good. I enjoyed it all week for dinner and looked forward to it every night.

Remember, if you’re not going to eat it right away then this recipe can easily be portioned out and frozen for future dinners. 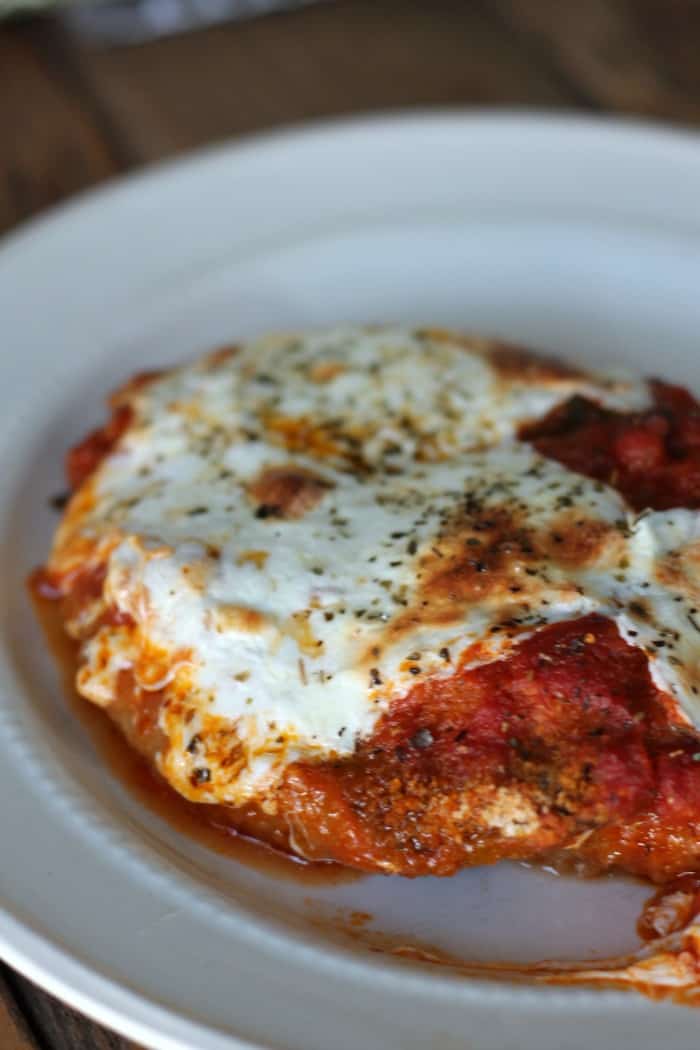 If you’re an eggplant parmesan fan I highly encourage you to give this healthier version a try. It’s super easy and I know you (and everyone else that tries this recipe) will love it!

Sugar: 6
Make-ahead instructions This eggplant parmesan can be made completely ahead of time and frozen into portion. It will keep in the refrigerator for up to 5 days and in the freezer up to 3 months. You can also make the baked eggplant slices ahead of time and freeze that to use in a later recipe.