This slow cooker pot roast with onion soup mix is so much more than a regular pot roast. It uses a homemade french onion soup mix that’s beyond easy to throw together. Then just rub it all over the chuck roast, add some beef broth and Worcestershire sauce, and set it and forget it! By the end of the busy workday, you’ll come home to a delicious pot roast that can be used in a variety of ways. Trust me, your family will want this to be a regular rotation on the meal plan!

It’s that time of year where I’m seeking out slow cooker recipes that can cook all day and also totally comfort me at the same time. It’s also a requirement that my house smells amazing with the aromas of what’s for dinner.

When I was coming up with ideas for this french onion pot roast, the one thing I knew for sure was I wanted easy. Like ‘dump and go’ easy.

If it’s needed, I’m totally fine with putting in the extra steps to create a delicious tasting slow cooker recipe. Because let’s be honest, we all know that cooking all day in the slow cooker can result in a tasteless dry dinner.

Just saying, I’ve been there many times. But, just like everyone else, I want easy to prepare.

Before I share the full recipe for this yummy pot roast with all of you, here are some questions I would like to answer first…

What cut of beef should I use for pot roasts?

Personally, I think chuck roast it’s best for any slow cooker recipes that are going to cook for a long time. If you don’t want to use chuck roast or can’t find it, then I recommend using another fatty cut of beef.

Basically, the more marbling the better.

Round and brisket are two other cuts of beef that work well in pot roast recipes. But if you can use chuck roast, then I recommend that.

Should I brown the chuck roast first?

But, if you’re feeling lazy, you can put it in without browning. I’ve done it both ways and each time the beef turns out delicious.

So with this recipe, it’s up to you.

Can I add any other vegetables to this slow cooker recipe?

I prefer to cook most of the vegetables on the side because this recipe does need to cook for a long time and often the veggies will just turn into mush. However, there are some vegetables that will work.

A good rule of thumb when adding vegetables to a slow cooker recipe is to put heartier vegetables on the bottom of the slow cooker. So, around the chuck roast or even underneath. Other vegetables like onions and mushrooms should go on top of the beef.

When I was researching recipes for slow cooker pot roast with onion soup mix, I came across all kinds of variations. Many used french onion soup packets or cans of french onion soup, even cream of french onion. Some used onions and other vegetables while others cooked them on the side or didn’t use any extra veggies at all. And while most recipes use chuck roast, there we others that used leaner cuts of meats.

This is what I decided on:

This is hands down my favorite cut of beef to use in the slow cooker! The marbling when it’s cooked down will create the most delicious tender shredded beef you’ll ever eat.

Leaner cuts of beef will become dry after being cooked all day in the slow cooker. To keep this recipe clean, I purchase an organic grass-fed chuck roast. In my opinion, the high quality the meat, the better the recipe.

Chuck roast is readily available at most grocery stores but if you can’t find it locally, then I recommend purchasing online through Butcher Box. This is where I get all of my meats! You can read my Butcher Box Review to learn more.

To get shredded beef, you need to use more liquid so I decided to use beef broth. Worcestershire sauce is one of my favorite ingredients to use in beef recipes because it provides such a richness.

Honestly, I was all set to use a packet of Lipton french onion soup mix… but then I took a glimpse at the ingredients. Ugh, even the “healthier” ones had preservatives.

So, I decided to make it homemade and I’m SO glad I did because it was better than store-bought and so easy to make.

I’ll share exactly how I made this down below.

Again, there are all different variations of homemade french onion soup mix but here’s a basic recipe based on the spices I had on hand.

This combination of spices smelled so good as I was mixing them together and it seasoned the beef perfectly. I don’t think I’ll ever use a store-bought packet again!

Note: For exact measurements for each spice, take a look at the recipe card located at the bottom of this post. 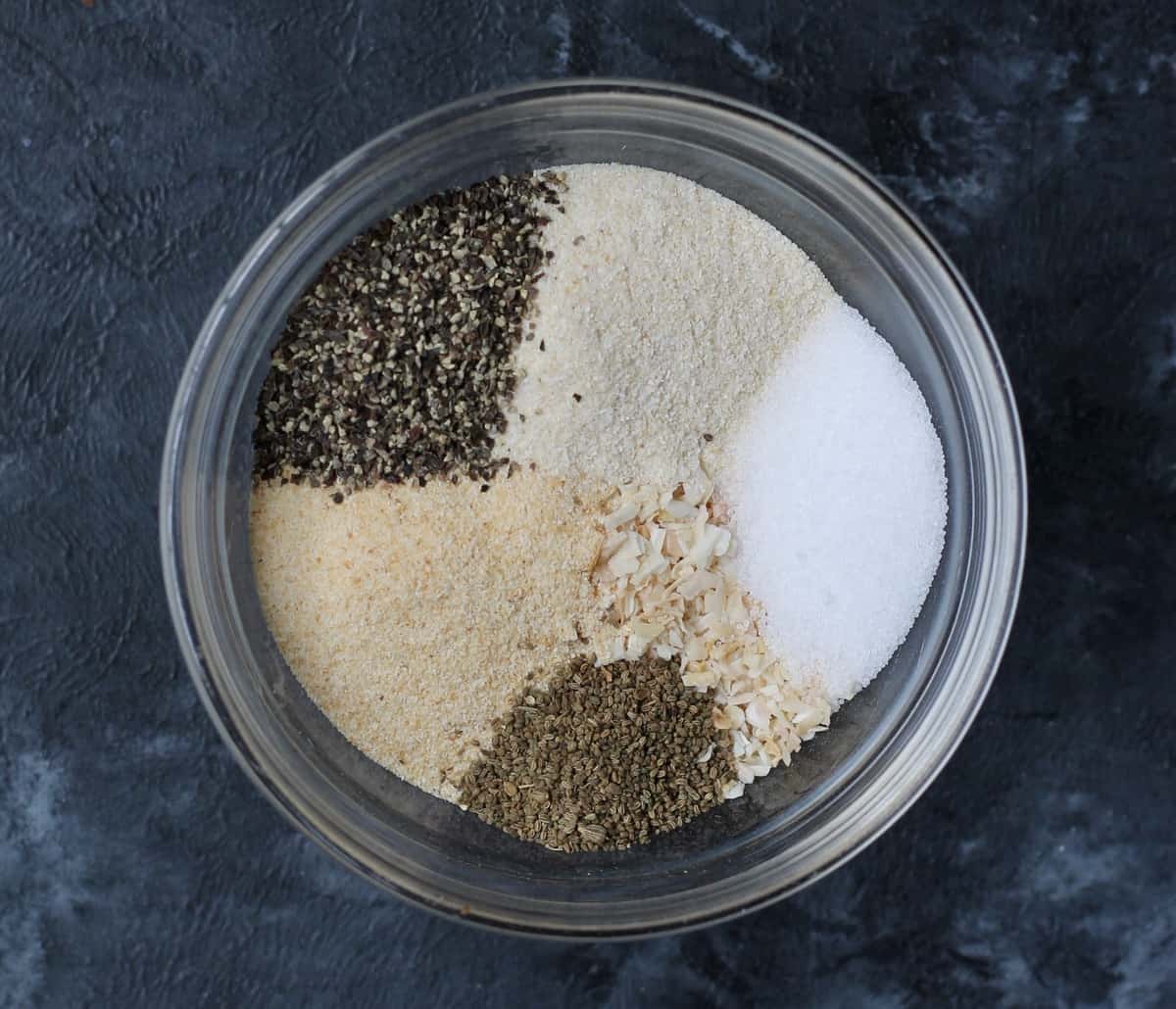 Before you start cooking anything, put together the french onion soup mix and get your other ingredients together. 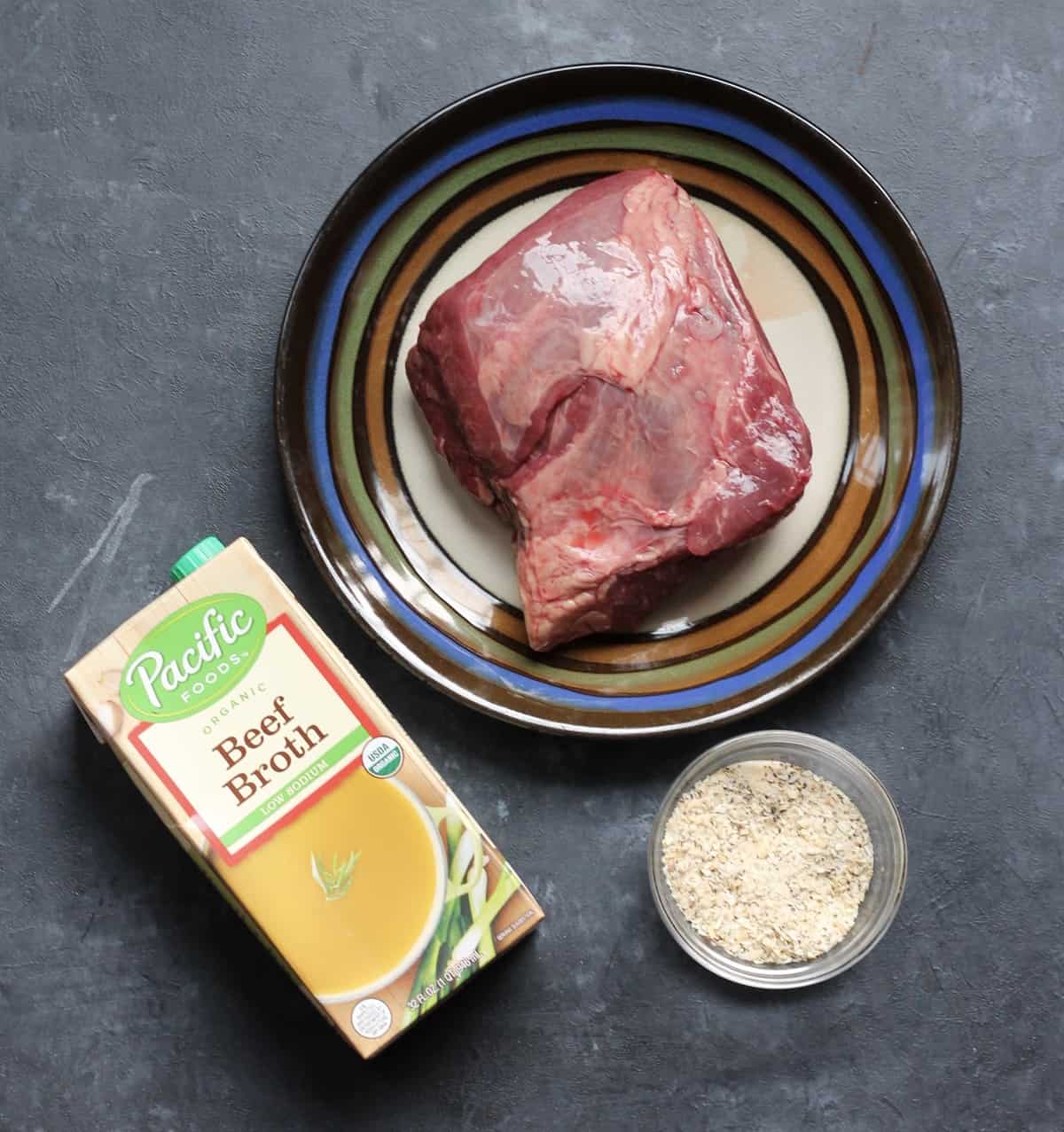 Rub the french onion mix all over the chuck roast. Then, mix together the beef broth and Worchestire sauce (not shown in the picture) and pour it into the slow cooker insert.

Place the lid on and then set to cook for 8-10 on low or 5-6 hours on high. The beef should be very tender and shred easily when done. 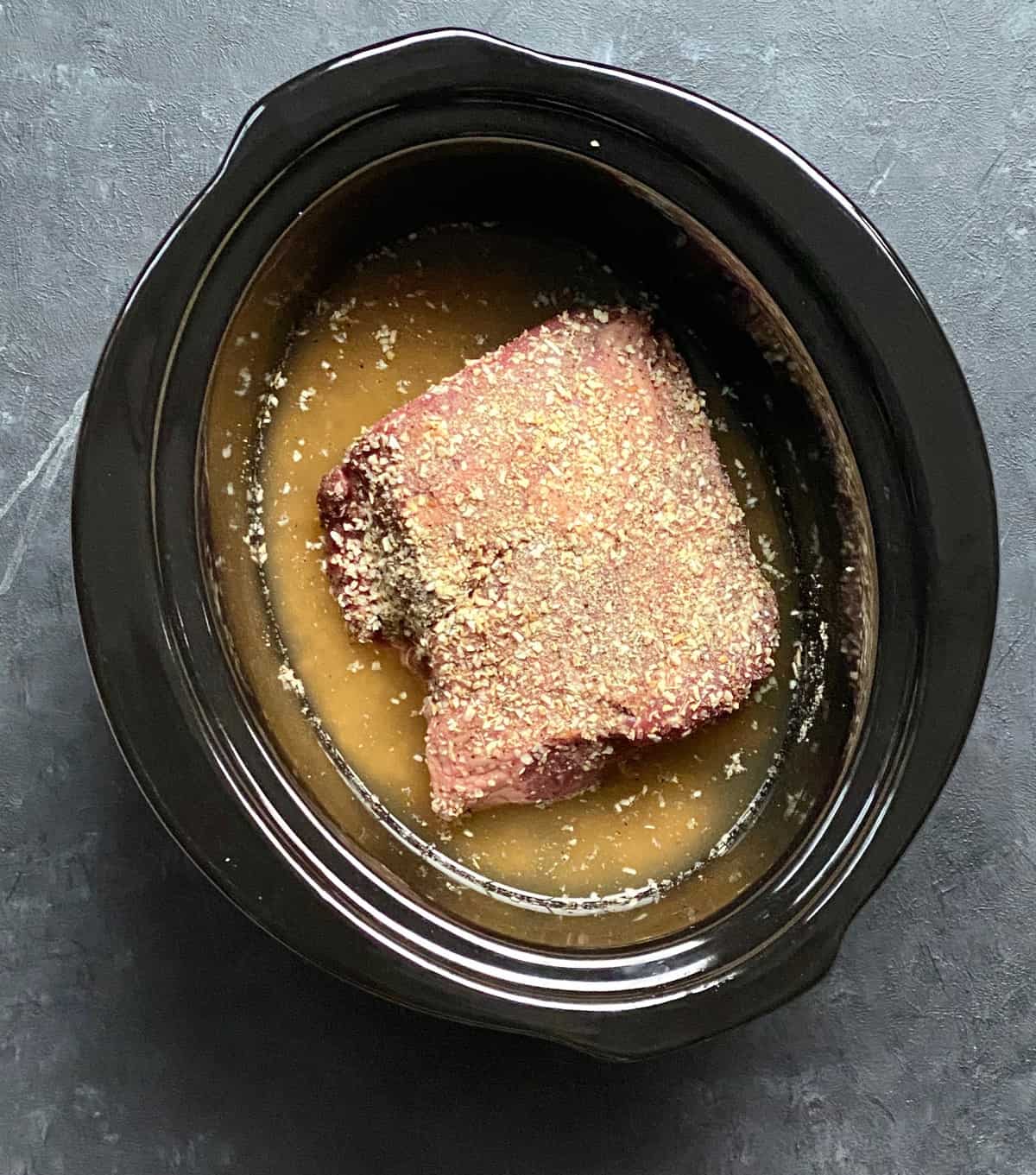 Remove the beef and place it into a bowl. Using two forks, shred the beef.

Mix in some of the juices from the slow cooker and stir in the rest of the salt. Taste for seasoning and serve hot!

One tip that I’ve learned from making numerous slow cooker meals is to salt again at the end. I usually add about 1/2 teaspoon of salt to the shredded beef, give it a taste, and if it needs more I’ll add some more. This really makes the other flavors pop and come together. 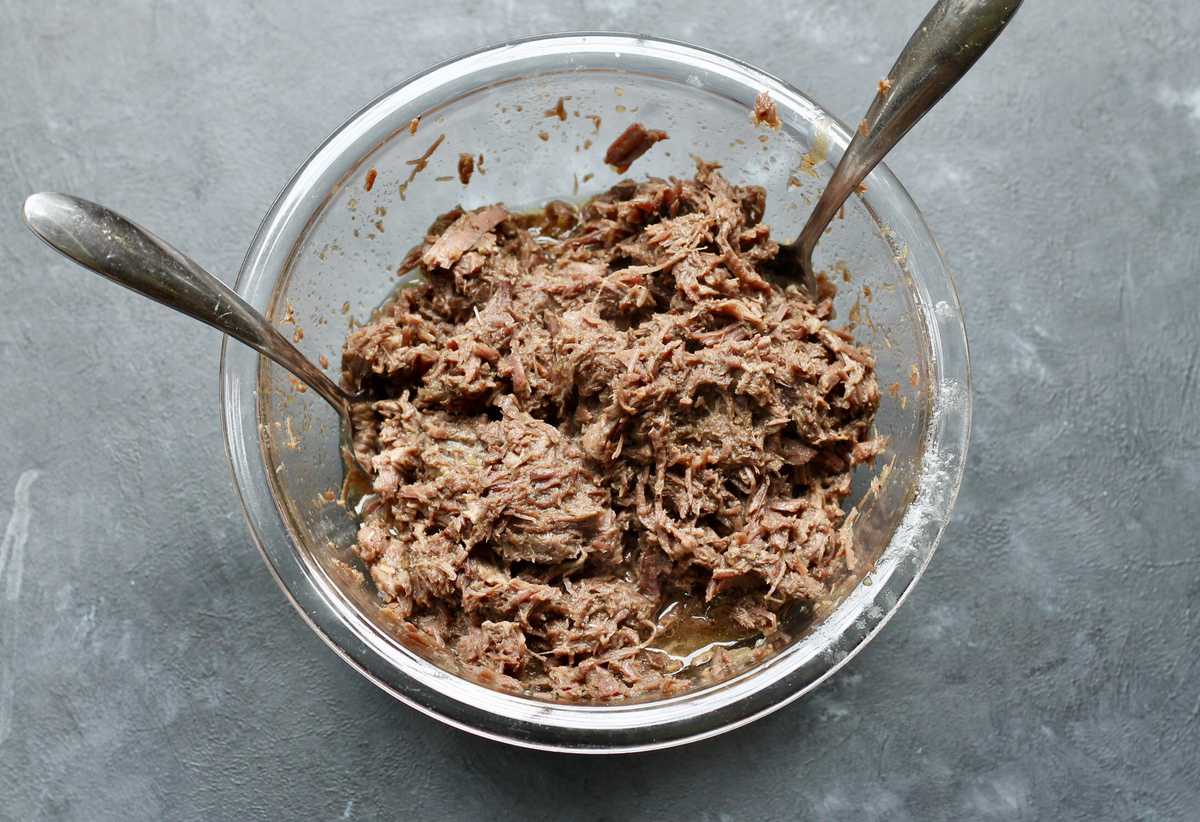 There are a few ways we absolutely love to eat this recipe: 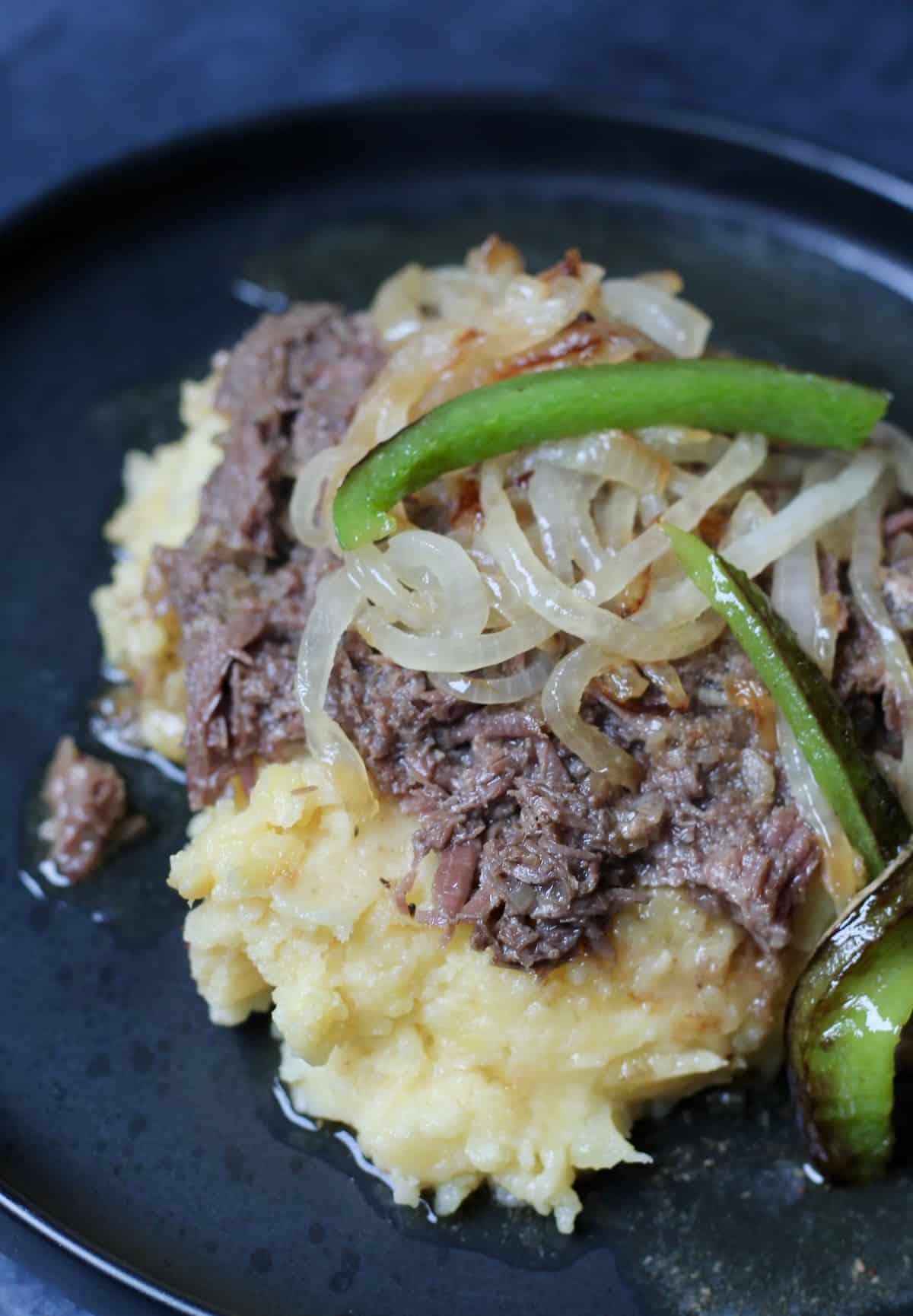 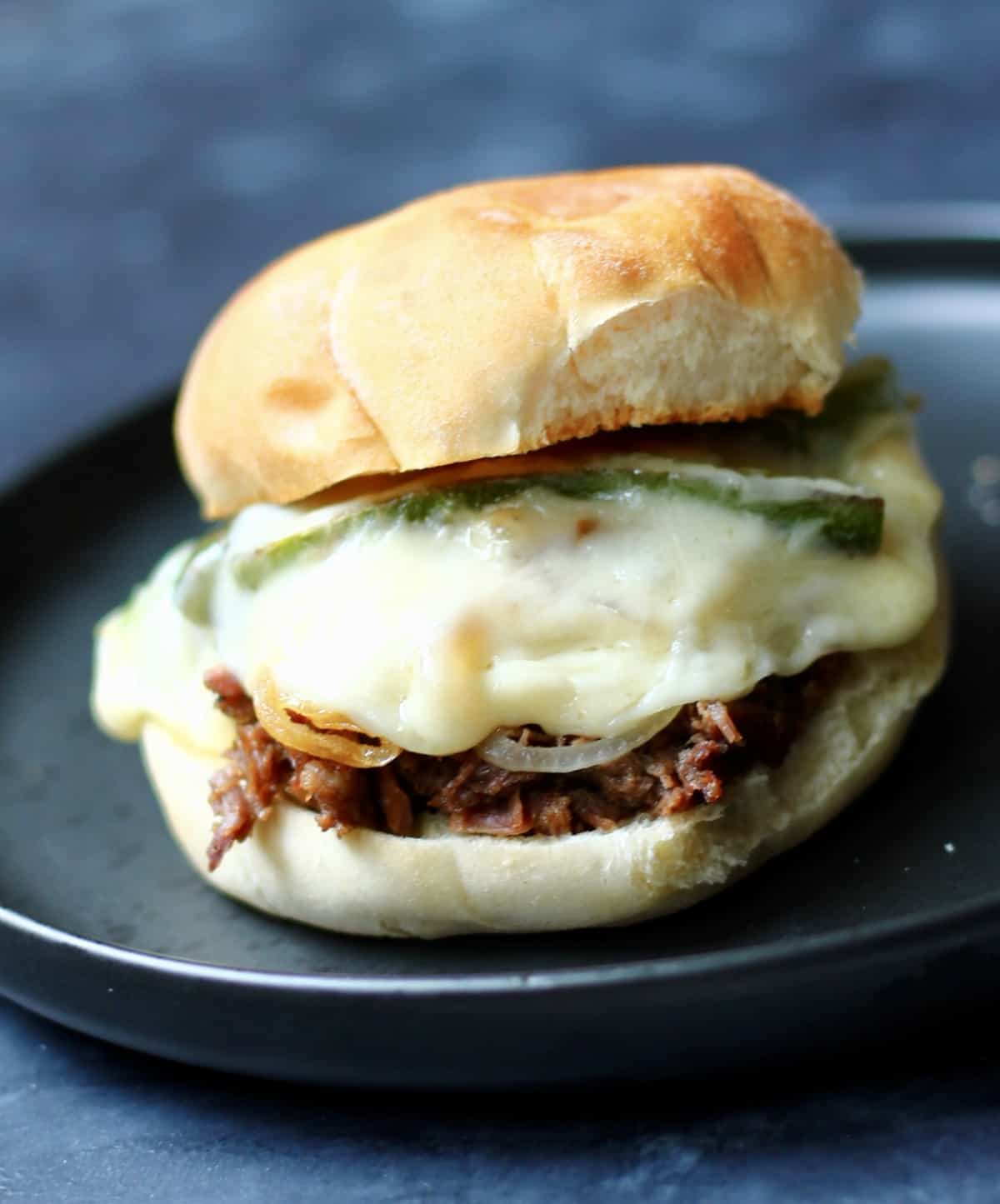 How To Meal Prep This Pot Roast Recipe

Here are a few tips on how you can meal prep this chuck roast recipe:

My goal is to never have to cook from scratch during the week. The only thing I want to do is heat up and eat! 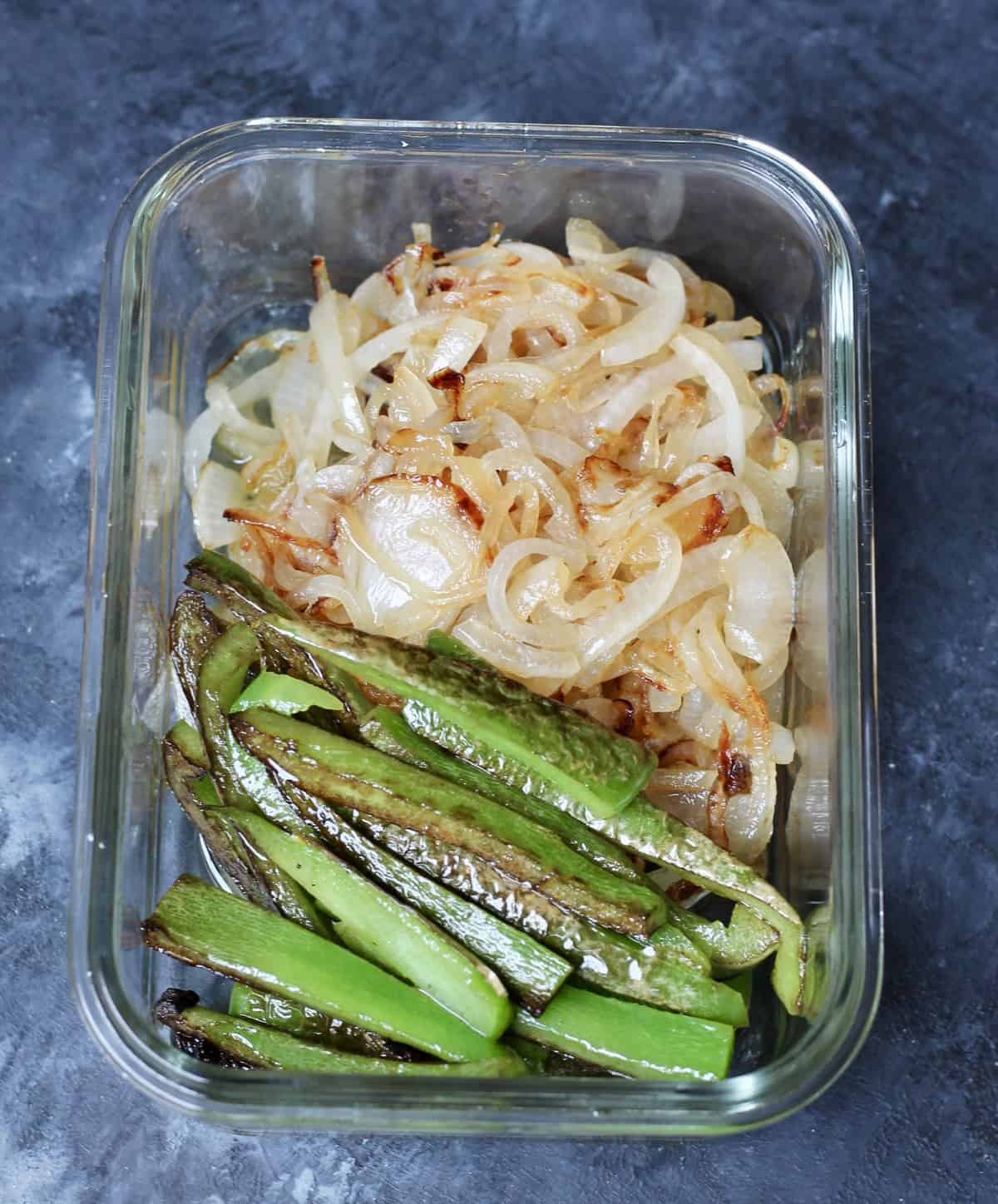 If you loved this recipe for Slow Cooker Pot Roast with French Onion Soup Mix, take a look at some of these other slow cooker recipes to add to your recipe book!

Share a picture and tag me on Instagram or Facebook if you decide to try making this recipe for slow cooker pot roast with onion soup mix! 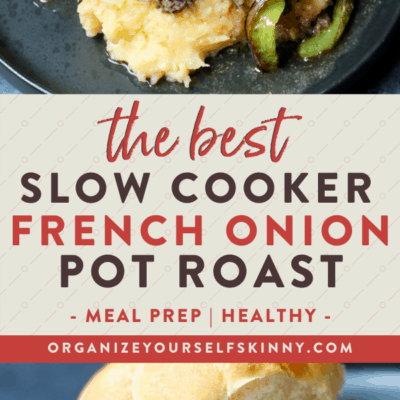 This french onion pot roast is incredibly flavorful and oh-so-easy to put together. Set this one, and forget it as your slow cooker does all the work for you!
5 from 1 vote
Print Pin Rate
Course: slow cooker
Cuisine: American
Prep Time: 10 minutes
Cook Time: 10 hours
Total Time: 10 hours 10 minutes
Servings: 8
Calories: 269kcal
Author: Organize Yourself Skinny