This vegan taco salad is flavorful, hearty, and filled with protein and veggies! You can switch it up with any ingredients you have on hand and customize it to your taste. The best part of this salad is you can make it ahead of time by layering all the ingredients into a portable mason jar salad.

One of the most popular salad recipes on my blog is this taco mason jar salad. Readers love it! And to be honest, I do too.

However, since I posted this recipe 7+ years ago, I’ve received numerous requests for a vegan taco salad. I can’t believe it’s taken me this long to create a vegan version. But, better late than never.

I wouldn’t consider myself a vegan at all but I do like eating plant-based vegan meals. And, believe it or not, so do my kids. I guess I can thank TikTok and Youtube for that! Haha..but seriously.

Most weeks, I save meats for dinners so breakfast, lunches, and snacks tend to be vegetarian or vegan.

Which brings me to this vegan taco salad.

Vegan taco salad is a great alternative when you want a Mexican inspired lunch without the meat!

I’m so excited to share this vegan recipe with you but first, let’s go over some questions about this salad recipe.

Which is the best vegan protein option for taco salad?

Obviously for the salad to be considered vegan, I needed to remove the taco meat and replace it with something else. I wanted to keep it super easy because I know all of you are like me and don’t have time for complicated.

I like using quinoa because it’s high in protein, fiber, and omega 3 fatty acids. So it really packs a nutritional punch to any vegan recipe. For added flavor, I cook the quinoa in vegetable broth and then add a tablespoon or so of taco sauce and a squirt of lime for some extra flavor.

If you don’t have quinoa, then you can use brown rice. Actually, any grain will work great! The purpose of the grain is to add bulk to a taco salad just like taco meat would.

Do I have to use pinto beans?

Nope. You can use any kind of bean you like! I personally love pinto beans but you can certainly use:

Supplies Needed To Make Salads In A Jar

It’s time to meal prep a couple of these delicious salads!

Here are the ingredients you’ll need:

How To Make A Vegan Taco Salad In A Jar

Now that I have answered your questions and you have all of the supplies and ingredients you need, let’s layer this taco salad!

The first layer of this vegan taco salad in a jar is the salsa. In my original taco salad recipe, I use salsa as the dressing. It works great so I decided to keep it with the vegan version. This is where you can really switch up flavors. I like to use a basic medium salsa but you can use whatever flavor salsa you like. There are so many varieties so you can really get creative!

Next, I add in pickled mild jalapenos. Of course, if you like spicy, then use some hot jalapenos. I put this after the salsa layer because they are wet and should be kept away from the greens. You can also use fresh jalapenos if you prefer! 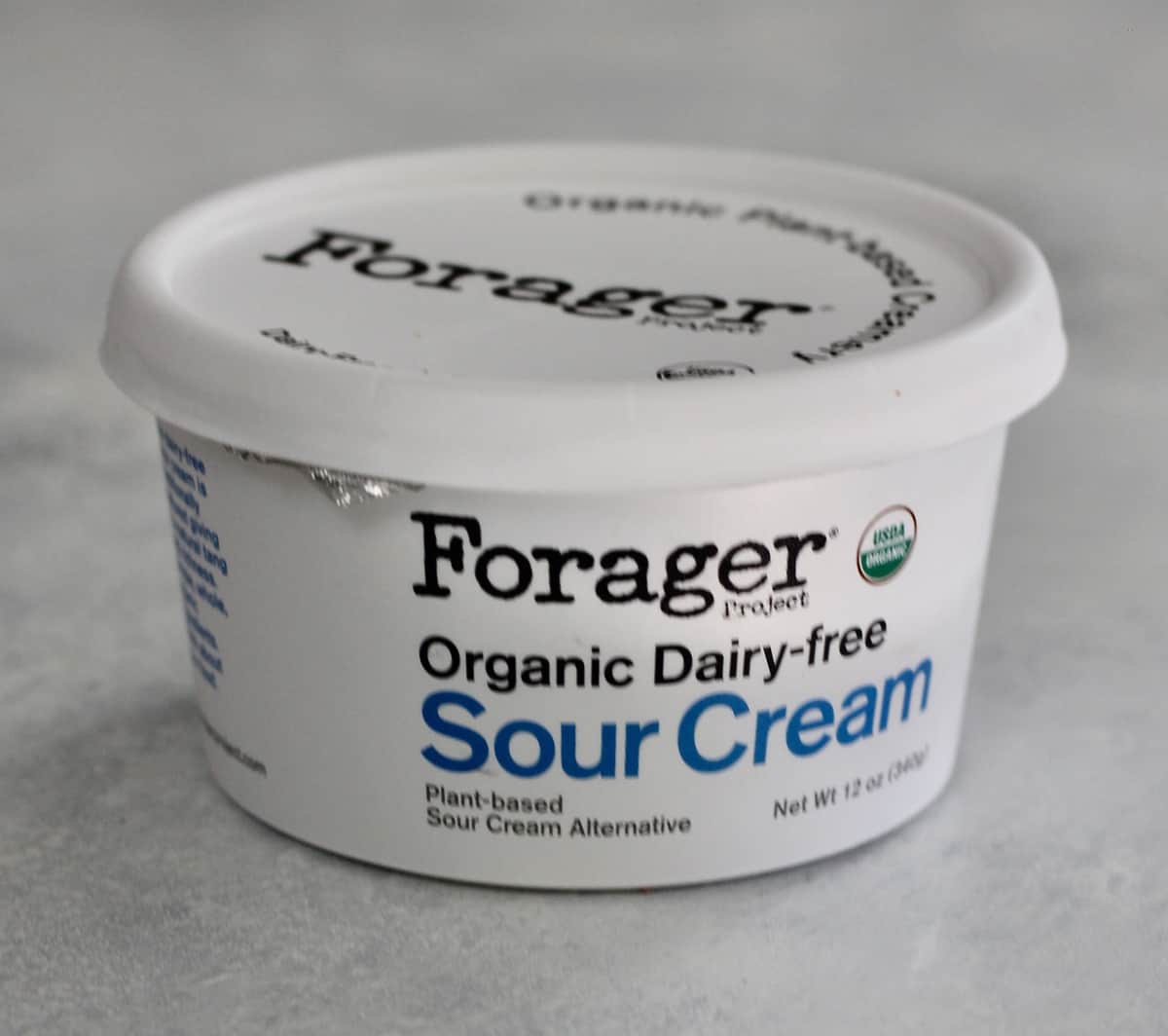 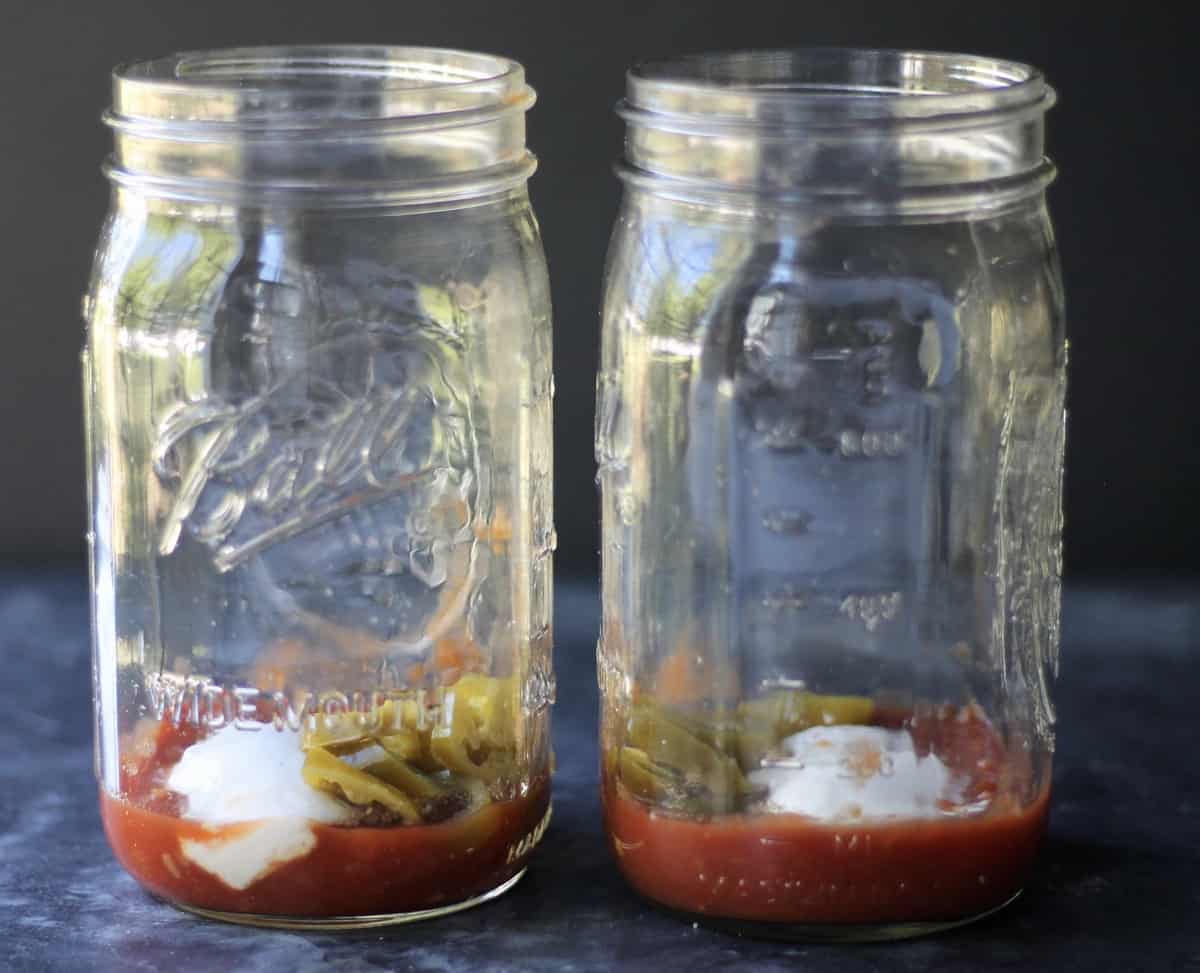 For the next layer, you want to add all of your hearty vegetables. You can add whatever you like!

Personally, I like bell peppers, red or white onion, and cucumbers. Since I’m using salsa in this recipe, I leave the tomatoes out but you can certainly add them in. Just like with other mason jar salads, think of vegetables that would taste good marinated or pickled. Those are the ones that do the best in this layer.

Next, add in the quinoa bean taco “meat” mixture that I mentioned above. I divide the mixture between all of the mason jars – it’s about ⅓ cup per jar. 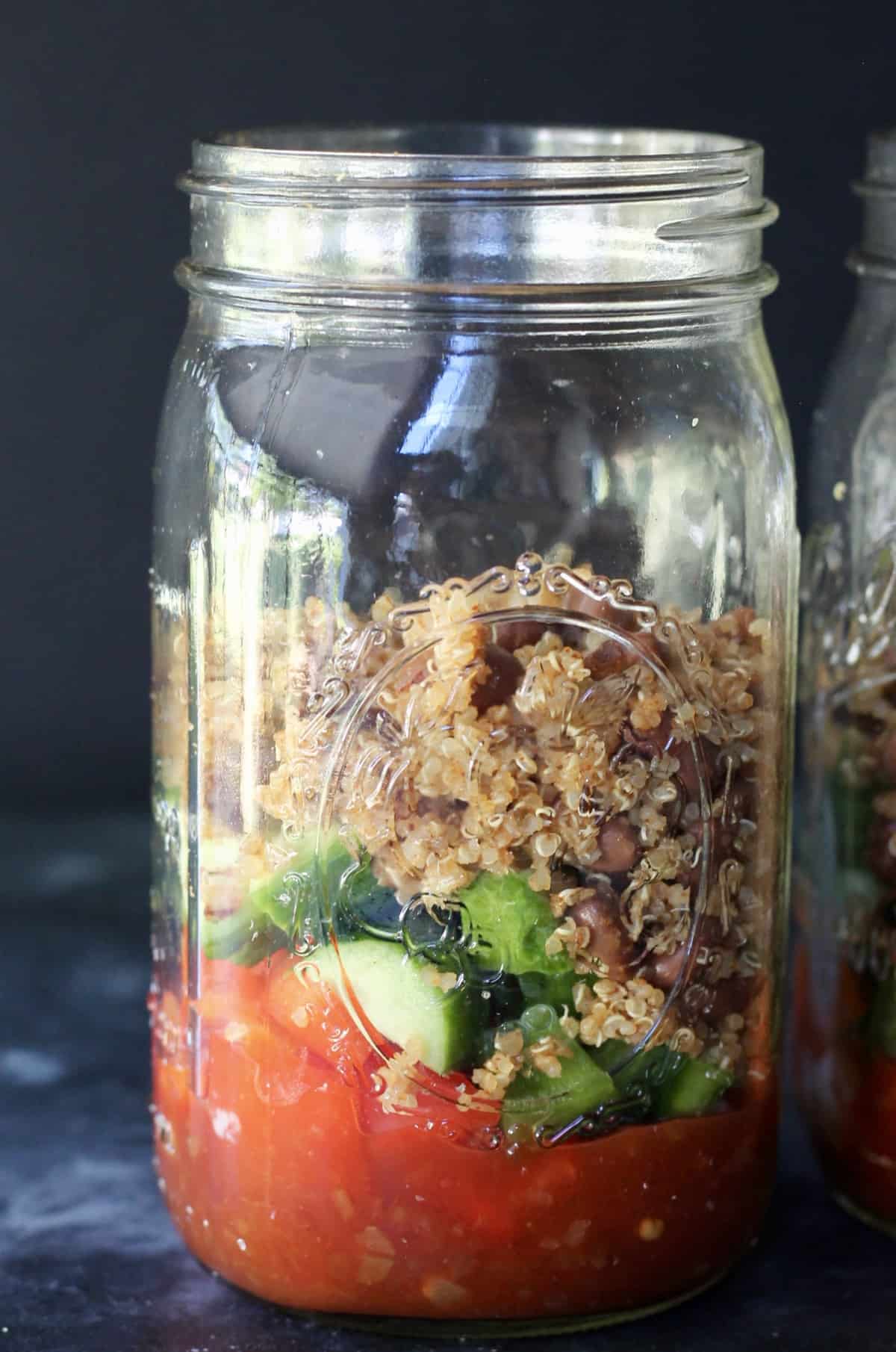 Now it’s time for cheese – well, vegan cheese. Believe it or not, being cheese-obsessed as I am, I actually really like vegan cheese!

My daughter has some issues with dairy and I also try to limit it so I started using vegan cheese here and there. I must say I’m quite impressed.

For this vegan taco salad recipe, I used this vegan cheddar cheese pictured below because that’s all I could find at Whole Foods. But, if you can find a vegan taco cheese or pepper jack, I’d use that. 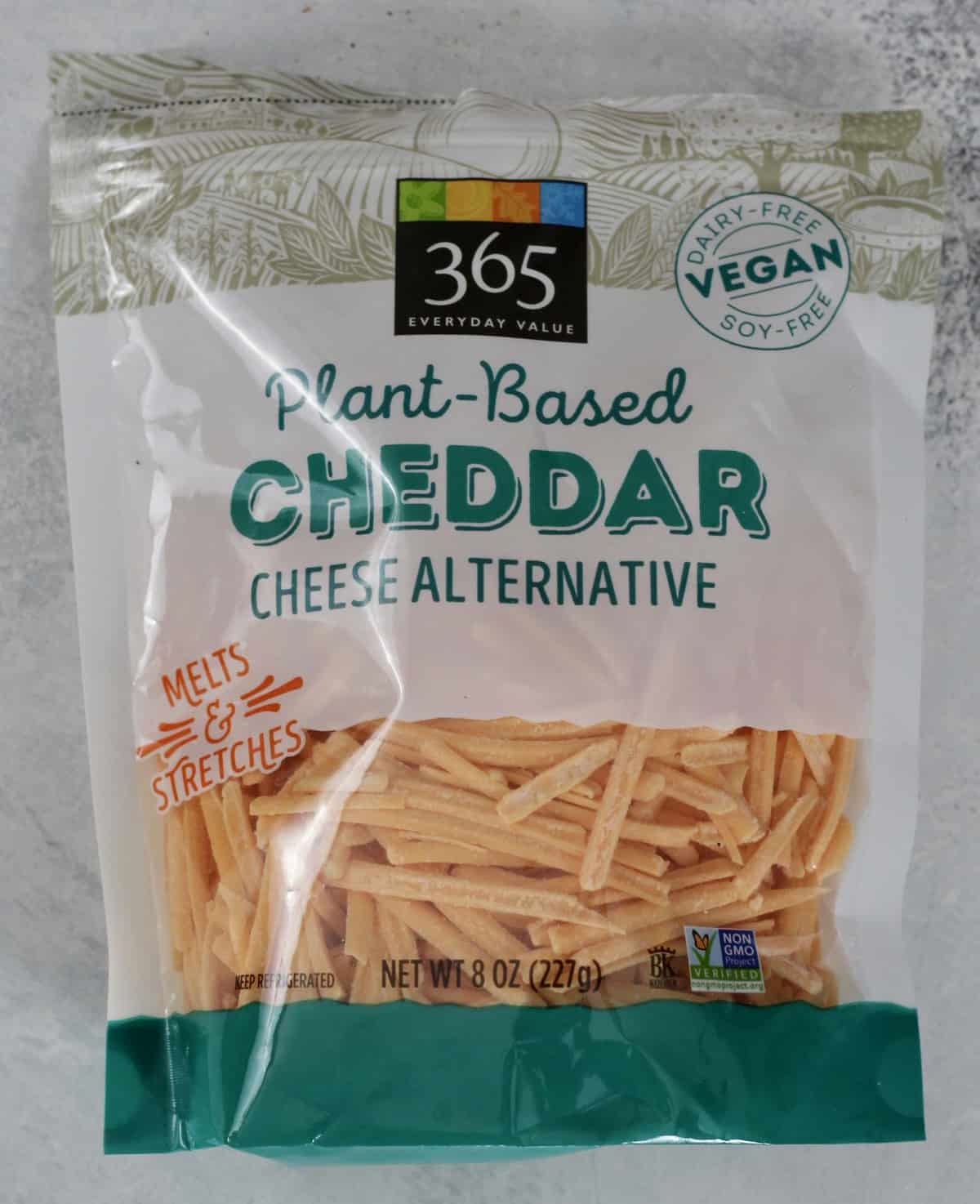 Last, you want to add the greens. For this vegan taco salad, I recommend using romaine lettuce!

Romaine has the best crunch that works best with this taco salad. 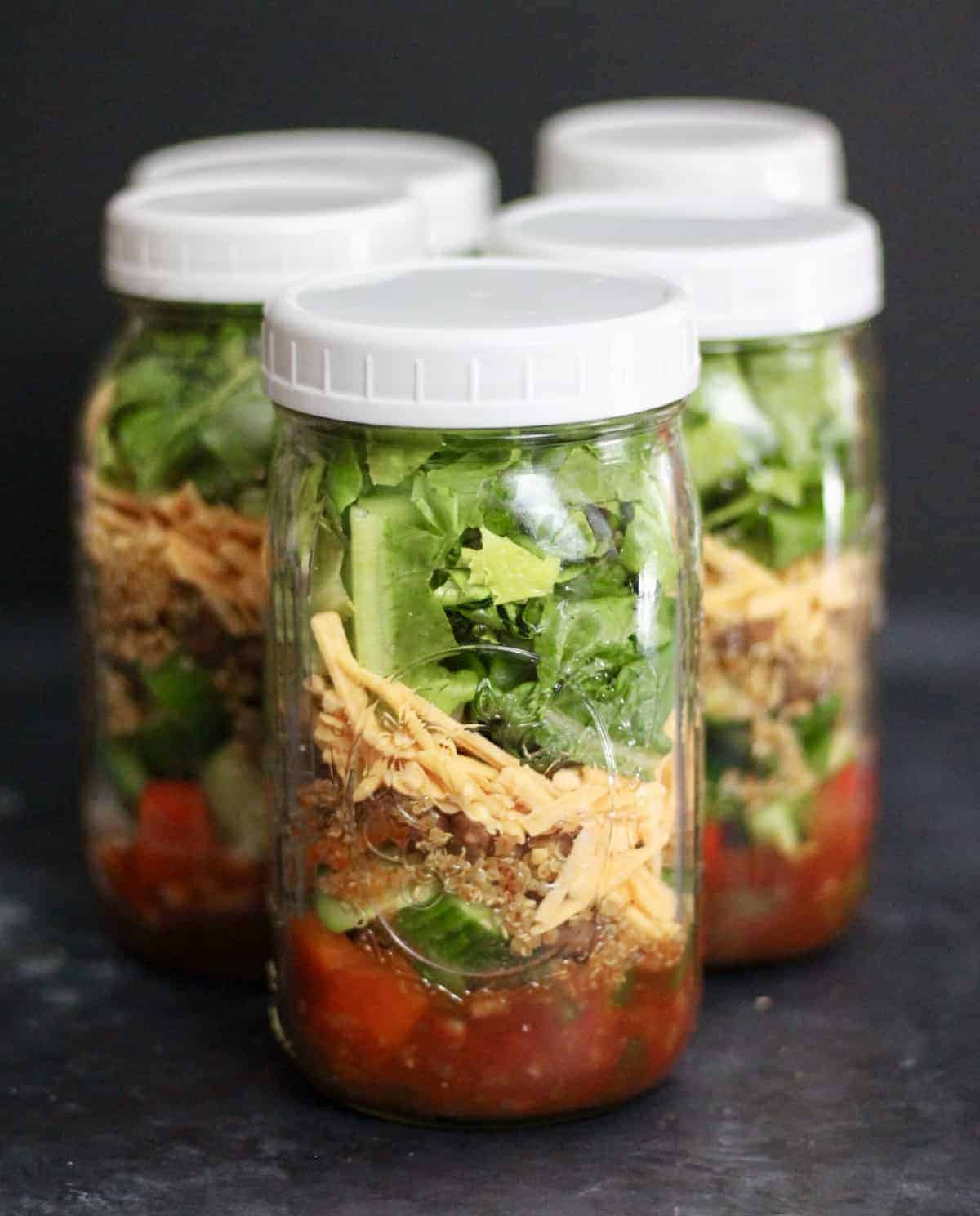 How To Store Vegan Taco Salad

After you layer all of the ingredients, then tightly put the top on and refrigerator for up to 5 days. When you’re ready to eat, dump the salad into a bowl, mix it up, and enjoy it!

You can also crush a few tortillas on top of the salad for a little extra salty crunch.

More Salad In A Jar Recipes

If you enjoyed this vegan salad in a jar recipe, check out some of these other mason jar salads I’ve put together: 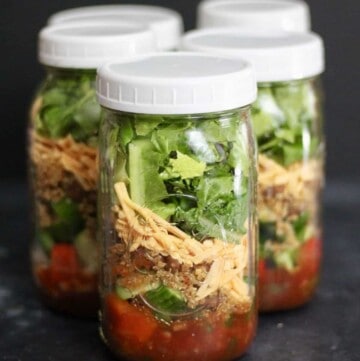 Vegan Taco Salad in a Jar

This vegan taco salad is flavorful, hearty, and filled with protein and veggies! You can switch it up with any ingredients you have on hand!
Print Pin Rate
Course: Lunch
Cuisine: Mexican
Prep Time: 30 minutes
Cook Time: 10 minutes
Total Time: 40 minutes
Servings: 5
Calories: 354kcal
Author: Organize Yourself Skinny