These healthy cinnamon rolls are made with white whole wheat flour, coconut sugar, buttermilk powder, and other simple ingredients to create a delicious wholesome sweet breakfast treat. These cinnamon rolls are easy to make ahead of time to enjoy on Christmas morning or other special occasions.

Over the years, it’s become a tradition for me to make these healthy cinnamon rolls on Christmas morning.

And, to be honest, my kids LOVE these rolls year-round so I also prepare them for birthdays and other holidays. I guess you can say, I have a lot of homemade cinnamon roll experience.

I went back and forth with sharing this recipe because in the grand scheme of things this isn’t exactly the healthiest recipe on the block. But, it’s healthier than purchasing store-bought or from a drive-through so I decided we all deserve a sweet treat on special occasions.

Also, I love traditions. Just knowing my kids for over a decade have woke up to these delicious cinnamon rolls makes me smile. I hope, as they grow into adults, they’ll always think about Christmas morning whenever the aroma of cinnamon rolls is in the air.

Simple ingredients – All you need is flour, sugar, butter, cinnamon, yeast, and buttermilk powder. Buttermilk powder might be the only ingredient you haven’t heard of. However, once you start using it you’ll wonder where it’s been this whole time. I’ll talk more about it below.

Easy to make – This recipe is made using a bread machine, so all you need to do is add the ingredients to the pan and set it to the dough cycle. After it’s done, stretch the dough out, add the filling, roll it up, and cut it into rolls. You’ll feel like a master baker with minimal effort.

The best homemade healthy cinnamon rolls ever – My daughter wanted me to add this! She says that she won’t even eat other cinnamon rolls because they don’t compare to mama’s homemade rolls.

Flour – I use an equal amount of white bread flour and white whole wheat flour. Bread flour has higher protein content and gives the dough more strength and allows it to rise high.

White whole wheat flour has the same nutritional value as whole wheat but it’s paler in color and has a milder flavor because it’s made with white spring or winter wheat. The 1:1 ratio I use creates the perfect dough for healthy homemade cinnamon rolls.

If you’re new to whole wheat recipes I recommend starting small and then replacing more white flour with whole wheat flour as you become more comfortable with the taste.

On the other hand, if you’re accustomed to whole wheat recipes then you can use more white whole wheat flour in the recipe.

Yeast – I’ve used both bread machine yeast and active dry yeast in this cinnamon roll recipe. So, both yeasts will work just fine.

The brands I use most are Red Star and Fleishman’s. Regardless of the type of yeast, I use 2 ¼ teaspoons for all of my bread machine recipes.

You can find bread machine and instant yeast in the refrigerated section of the grocery store.

There are a couple of tricks when using yeast:

Dry Buttermilk Powder – Discovering dry buttermilk powder was a huge baking game-changer for me. How many times have you purchased a carton of buttermilk only to need ½ cup or less? Then weeks later you throw it out because you didn’t need it again? That all changes with buttermilk powder.

The only difference is that you add it directly to the dry ingredients or reconstitute it with water before adding it to the recipe. In general, you’ll need ½ cup of water for every tablespoon of buttermilk.

It won’t have the same consistency as cultured buttermilk but rest assured that it will still serve the same function in baked good recipes.

If you love making cinnamon rolls, pancakes, or other recipes that call for buttermilk then do yourself a favor and grab some powdered buttermilk in the refrigerated section of the grocery store.

Coconut Palm Sugar – Traditional cinnamon roll recipes call for a brown sugar, butter, and cinnamon filling. For a healthier version, I decided to use coconut palm sugar in place of the brown sugar.

Coconut palm sugar is an unrefined brown sugar derived from the coconut palm tree. It has a lower glycemic index than regular sugar and also retains a lot more nutrients.

The real test is the taste. Truth be told, my kids didn’t even notice the difference when I switched to coconut palm sugar. It was delicious and the perfect healthy substitute for brown sugar.

You can purchase coconut palm sugar in the baking section of the grocery store.

Pay attention to the dough during the mixing and kneading process. The ingredients should form a smooth round dough ball. After the first mix, if the dough seems too wet then add 1 teaspoon of flour at a time until the dough stops sticking to the sides.

If the dough seems crumbly and it’s not forming together then add in 1 teaspoon of water at a time until it forms a ball.

All you need to do is put the dental floss under the rolled-up dough and then cross the strings and pull. You’ll get a perfectly cut roll every single time.

Whole wheat dough creates a more dense dough. This will prevent the dough from rising high and will also create a less fluffy cinnamon roll. The flavor is still there but just something to be aware of with this healthy cinnamon roll recipe.

Create a vegan version. I’ve been asked a few times about making a vegan cinnamon roll recipe. Personally, I haven’t done that but here are the suggestions I give:

It’s all about portion control – The best way to prepare a healthy cinnamon roll recipe is to pay attention to the portions. Sure, we can switch up the flour and sugar but sometimes it’s best not to mess too much with a good thing.

Instead, measure out the ingredients so you don’t overdo it. For example, portion out the butter and sugar for the filling instead of slathering it on. That alone can save on fat and calories.

Same with the icing. Measure it out so you can still eat the real thing but in moderate amounts.

If you’d like to reduce the calories and fat my suggestion would be to cut the rolls into smaller pieces and/or leave out the glaze.

Give the rolls time to rise. Again, whole wheat dough struggles to rise high. So, the rolls probably won’t double in size. However, they will rise so give them 30 – 45 to work their magic.

How to Make Healthy Cinnamon Rolls

Step 1:  After the dough is done, remove it from the bread pan and stretch it onto an 11 x 17 cookie sheet (sprayed with cooking spray). I like doing it this way because it makes it easier to stretch the dough into the perfect size without getting my counters dirty.

Of course, you can also roll the dough out on a clean surface dusted with flour.

Step 2: Using a pastry brush, brush the melted butter on top of the dough, leaving about a 1-inch border. Then, sprinkle on the coconut sugar and cinnamon.

Step 3: Roll up the dough into a log. First, fold in the short ends by an inch or so and then roll up one long edge working towards the other one until you get a long log. Pinch the seems to seel closed.

Step 4: Using a piece of dental floss, or a sharp serrated knife, cut the log into 12 rolls. Sometimes I don’t measure correctly and I get more or less.

Step 5: Arrange the cinnamon rolls into a 9 x 13 baking dish coated with cooking spray. Cover with plastic wrap and let the uncooked rolls sit on the counter for 30 – 45 minutes to rise.

Step 6: Preheat the oven to 350 degrees. Remove the plastic wrap and bake the cinnamon rolls for 40 – 45 minutes. The rolls should be slightly brown and cooked in the center.

Bread Machine – I have this Oster Brand Bread Machine. It’s inexpensive and works perfectly for these cinnamon rolls. I also use often to make my favorite pizza dough recipe. 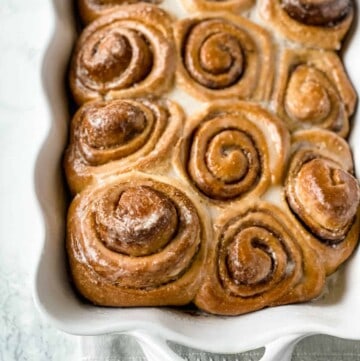 How to make-ahead cinnamon rolls

One of the many beautiful things about this healthy cinnamon roll recipe is it can be made ahead of time.

Sometimes, while I’m stocking my freezer, I’ll make cinnamon roll dough to freeze. After the dough is done I’ll place it into a freezer bag and freeze. A day before I plan on making the rolls I’ll take the frozen rolls out to thaw in the refrigerator.

In the morning, I let the rolls sit on the counter for about 30 – 45 minutes to come to room temperature and rise. Then I’ll continue with the recipe.

When you’re ready to prepare the rolls take them out of the freezer and let them thaw overnight in the refrigerator. Then let the rolls sit on the counter for 30- 45 minutes to come to room temperature and rise.

Cook completely and then just eat throughout the week. Cinnamon rolls taste great the next day or even a few days after they’re made. So, if my kids want cinnamon rolls then I’ll whip up a batch and warm up in the oven or microwave during the week.

What to serve with healthy cinnamon rolls?

Like I said earlier, I love to serve cinnamon rolls on Christmas morning. Here are other breakfast recipes to serve alongside them.

Have you tried my healthy cinnamon rolls? If so, I’d love for you to rate this recipe and leave a comment below. We all benefit from your personal experience with this recipe, and what, if anything you did differently. Also, it would be awesome if you could share a picture on Instagram and tag it #organizeyourselfskinny. I can’t wait to see it!