When you need comfort food, nothing compares to classic Slow Cooker Beef Stroganoff. Tender sirloin, mushrooms, and the most delicious silky savory sauce, all tossed with egg noodles. This healthy beef stroganoff is made from scratch using clean ingredients (no canned soup) but still made easy with the help of the crockpot.

This post contains affiliate links. I am an affiliate for Amazon Associates and other brands and earn a small commission on qualifying purchases. You’re by no means obligated to use my links but, if you do, thank you for supporting Organize Yourself Skinny.

Comfort food and slow cooker- the two words I look forward to every winter. This Slow Cooker Beef Stroganoff recipe combines those words and is one of my favorite healthy comfort food dishes to make in the slow cooker.

Of course, you can make this on the stovetop with my easy beef stroganoff recipe, but if you’re looking for dinner to cook while you focus on other things, then this crockpot version is for you.

Sirloin. Using sirloin steak instead of a fattier cut of beef like chuck roast or beef stew meat creates a crockpot beef stroganoff recipe lower in saturated fat, calories, and cholesterol. The sirloin will get tender and delicious cooking in the crockpot, but you need to watch it, so it doesn’t dry out.

Another benefit of using sirloin is that the gravy doesn’t end up greasy like it would with a fattier cut of meat.

Onion and garlic. The flavor foundation for this stroganoff gravy. I prefer using white onion, but a yellow onion would work too.

Beef broth. This is the base for the sauce. Don’t forget to save ½ cup to make the slurry to thicken the sauce after it cooks. The beef broth gives the best flavor to this beef stroganoff recipe, but any broth will work. If you are watching your sodium then use a low-sodium broth.

Sliced mushrooms. Let’s start with the variety. I keep this recipe simple and use sliced white mushrooms. However, you can also use cremini (baby portobello’s) for a meatier mushroom with more flavor. Honestly, I find that the type of mushroom doesn’t matter because it soaks up the taste of the sauce.

Dried dill weed. Dill weed is not an ingredient in classic stroganoff recipes, but it’s found a place in modern versions, and I think it’s delicious. I only use 1⁄2 teaspoon in this recipe, and that’s the perfect amount. If you don’t like dried dill weed, then leave it out. If you want to use fresh dill, I recommend using ½ tablespoon and adding it at the end.

Cornstarch. Cornstarch creates a creamy, silky smooth sauce quickly, and you don’t have to use as much. Traditional stroganoff recipes made on the stovetop use flour to thicken the sauce. Still, cornstarch is another alternative when making this recipe in the crockpot because it has more thickening power than flour. It’s also a great option when you want to keep the sauce gluten-free.

Sour cream. Another unique feature of stroganoff sauce is its creaminess, and that’s made possible with sour cream. I prefer to use full-fat sour cream because it’s a clean option. Light sour cream includes preservatives and additives I don’t want in our food.

Egg noodles. This is the classic noodle of beef stroganoff. Use whole grain to keep it a healthier version.

What is stroganoff sauce made of?

I guess it all depends who, you ask? Old school versions keep it simple with cubed beef, bouillon, mustard, and sour cream.

Over the years, the recipe has evolved to include mushrooms, different herbs like dill and thyme, onions, garlic, mustard beef broth, and sour cream. Some recipes swap out the sour cream for cream cheese or add both. You’ll even find wine in some stroganoff recipes.

Of course, the beef stroganoff recipes of the 70s and 80s include canned cream of mushroom soup, but those have all kinds of additives, preservatives, and other weird processed ingredients.
If you’re trying to eat clean, then making stroganoff from scratch is the way to go. This healthy stroganoff sauce is made with clean ingredients and is easy to prepare.

What cut of beef can I use for stroganoff?

Using sirloin steaks keeps this recipe on the healthier side. However, you can also use flank steak, stewing beef, filet, tenderloin, boneless rib eye.

Keep in mind that the cheaper the cut of meat is, the tougher it will be, and you need more cooking time to break the fast and collagen down.

Using a tender, juicier cut of meat like filet or sirloin will work the best if you’re making stroganoff on the stovetop.

This crock pot beef stroganoff recipe gets better by the day! 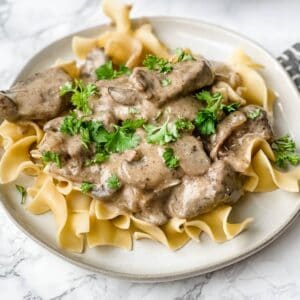 Store the stroganoff sauce in an airtight container separately in the refrigerator for up to 4 days. I recommend storing the noodles separately, so they don’t get mushy. If you want to make a portioned-out dinner, then add a portion of stroganoff and noodles side by side into a glass meal prep container. Heat in the microwave for 1-2 minutes when ready to eat, then stir and heat for another minute. You can also freeze beef stroganoff using 1-cup silicone trays (Souper cubes) or freeze into portioned dinners as I described above. Reheat on the stovetop or in the microwave. Another option is to assemble the ingredients into the slow cooker insert and refrigerate. Set the slow cooker the following morning and continue with the recipe.

Did You Make This Recipe?

Have you tried this Slow Cooker Beef Stroganoff? I can’t wait to see it! If so, I’d love for you to rate this recipe and leave a comment below. We all learn from each other’s experiences. Also, it would be awesome if you could share a picture on Instagram and tag it #organizeyourselfskinny.